LFC Legends set to take on Celtic Legends in Spring 2023 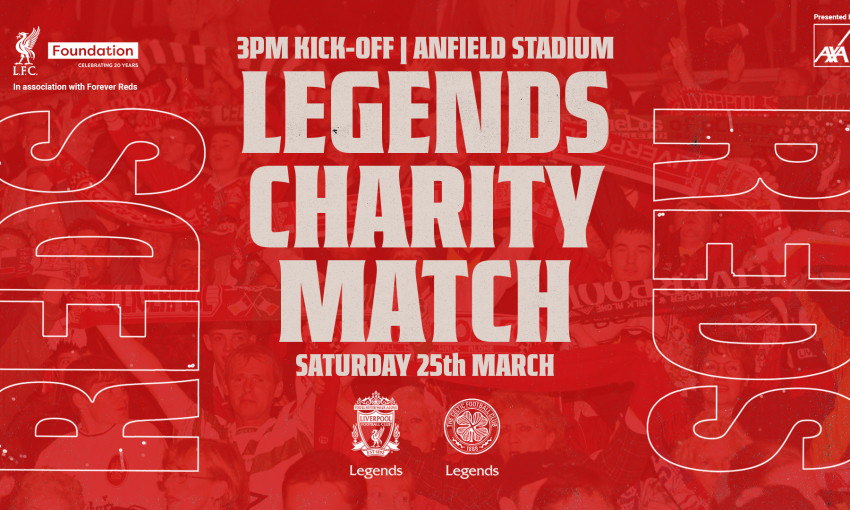 This is the first occasion at Anfield Legends will face each other from the two clubs, which are linked by players, managers, and of course a much-loved shared football anthem in ‘You’ll Never Walk Alone.’

One hundred per cent of the proceeds raised from the fixture, will support a range of LFC Foundation’s and partner charities programmes including schools, inclusive sports, social action, health and wellbeing and food poverty.

To date, the previous six LFC Foundation Official Legends Charity Matches held at Anfield have raised a total of £5m for the Reds’ charity and its charity partners to fund the incredible work.

And in the last 12 months alone the LFC Foundation has supported more than 83,000 people, almost two thirds of those coming from the most deprived areas in the UK.

It has also delivered £8m into the local economy and nearly £25 million in health benefits. Celtic’s official charity, Celtic FC Foundation, which provides assistance to the most disadvantaged and vulnerable children and young people will also receive a donation alongside   Forever Reds - the official LFC former players association – which among other things, provides support to the club’s former players in need of care.

A stellar line up of players will be announced in the coming weeks for the Official Legends Charity Match, which is brought to you by LFC Foundation in association with Forever Reds.

In September, the LFC Legends were crowed Legends of The North after beating Manchester United Legends over a thrilling two leg spectacle at Old Trafford and Anfield. The home game raised over £500,000, which benefitted the LFC Foundation’s charity partners, Cash For Kids, and IntoUniversity, as well as Forever Reds and the Reds’ charity’s local community, social action and football projects.

Matt Parish, chief executive of LFC Foundation, said: “We are pleased to announce our seventh home Official Legends Charity Match against Celtic Legends next year and we are very much looking forward to welcoming the LFC family to Anfield for a fun-filled afternoon.

“I’m always overwhelmed by the support and generosity we receive that enables us to support more children, young people, and families in underserved communities across the Liverpool City Region and beyond thorough our programmes and our charity partners.

“Both clubs have a shared history and I’ve no doubt that the Legends will put on a fantastic and competitive display of football for all to enjoy. “

Tickets for the charity match are priced at £27 for adults, £7 for juniors and £17 for over 65s. Season ticket holders can buy tickets from 1pm on Monday 12th December, Members from 1pm on Tuesday 13th December and the general sale will take place on from 1pm on Thursday 15th December.

Tickets can be purchased online by visiting the website here. Disabled supporters can visit the Accessibility Hub for full sale details

Premium tickets are available from £50 and hospitality tickets start at £130. Please visit the website here for more details.