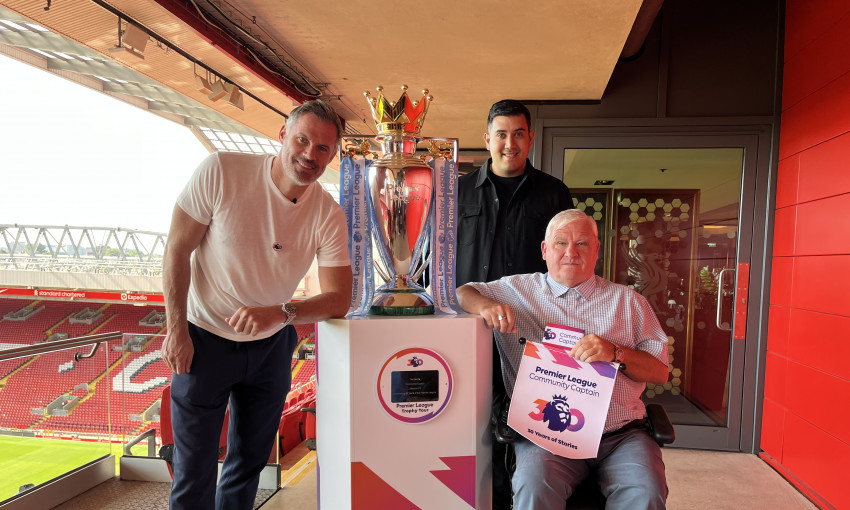 Ted Morris, 58, of Halewood, has been named as Liverpool FC’s Community Captain in recognition of his incredible work leading the Liverpool Disabled Supporters Association (LDSA).

The Community Captain accolade is being given to more than 100 members of the public who have made an outstanding contribution to their club and local community, as part of the Premier League’s 30th anniversary celebrations.

Presentations to the Captains form part of the Premier League Trophy Tour, which is visiting more than 50 professional, non-league and women’s clubs across England and Wales who receive funding from the Premier League.

Ted received the accolade at Anfield, with Liverpool legend Jamie Carragher surprising him with a PL30 Community Captain armband and pennant. A plaque engraved with Ted’s name was also added to a bespoke Premier League Trophy plinth created for the Tour.

Working closely with the club, Ted and the LDSA have been able to provide a number of once-in-a-lifetime experiences for disabled supporters and members, as well as delivering food parcels, providing free meals to children, virtual cooking nights and allowing junior members to experience hospitality at Anfield for free. In the last two years the LDSA have reached over 11,656 members of the community and now have over 1,200 members.

Ted, Secretary of Liverpool Disabled Supporters Association.  “I’m honoured and humbled to have been nominated for this award, it really means a lot to me and will mean a lot to the people I represent. I’m passionate about what I do, and I don’t do it for recognition, but I am absolutely honoured to have been given the Community Captain award

“Receiving the award from Jamie and Rishi who are supportive of what we do means so much, we couldn’t do a lot of what we do without them, Liverpool Football Club and the 23 Foundation that support our disabled children and fans.”

Former Liverpool FC player Jamie Carragher said: “It’s thoroughly well-deserved for Ted and the group he represents to win the Community Captain award. He is a great spokesperson for the Liverpool disabled supporters’ group, but also Liverpool supporters in general.

“Ted done some fantastic work for Liverpool’s disabled community, and I think he will continue to play a big role in the club in the future which shows how highly well thought of Ted and his group are. Long may that continue.”

Rishi Jain, Senior Manager of Equality, Diversity & Inclusion at Liverpool FC, added: “Ted is someone who always puts disabled supporters at the forefront of all that he does. I’ve worked with him for over a year now and the LDSA has grown by over 25% during that time.

“That comes down to the inspiring work he does to give disabled supporters more opportunities to attend games and take part in once-in-a-lifetime experiences such as having wheelchair users on the pitch at Anfield at the end of last season.

“We’ve worked hard to raise the profile of the LDSA and Ted’s commitment to inclusion is what makes the approach so successful. The work he does across all aspects of equality; supporting Pride events, LFC Foundation and the work we do across the club is what makes him a well-deserving Community Captain.”

Premier League Chief Executive Richard Masters said: “As we mark 30 years since the Premier League first kicked off, it is important we celebrate the unsung heroes who deliver brilliant work in their communities. These people – whether they are participants, coaches, volunteers or long-time employees – are the lifeblood of their clubs and their communities

“The continued success of Premier League football enables us to provide unprecedented investment in communities and wider football. As we look to the future, we are committed to investing more than ever, to help develop the game and provide opportunities to people of all ages.”

Over the next three years, the League will continue its world-leading levels of support by contributing £1.6 billion to communities and the wider game.

During the Trophy Tour, the League will be announcing new financial commitments to benefit fans and communities. This includes increased investment into the Premier League Fans’ Fund, with £5m available to support fan engagement projects across the top four divisions of the football pyramid.

The League is also investing an additional £13.5 million into the Football Foundation to create small-sided pitches in the heart of communities that need them the most. The tour will also give an opportunity to highlight new Premier League investment into women’s and girls’ football, including the Emerging Talent Centres announced earlier this summer.