LFC and Quorn Team Up to Tackle Food Poverty 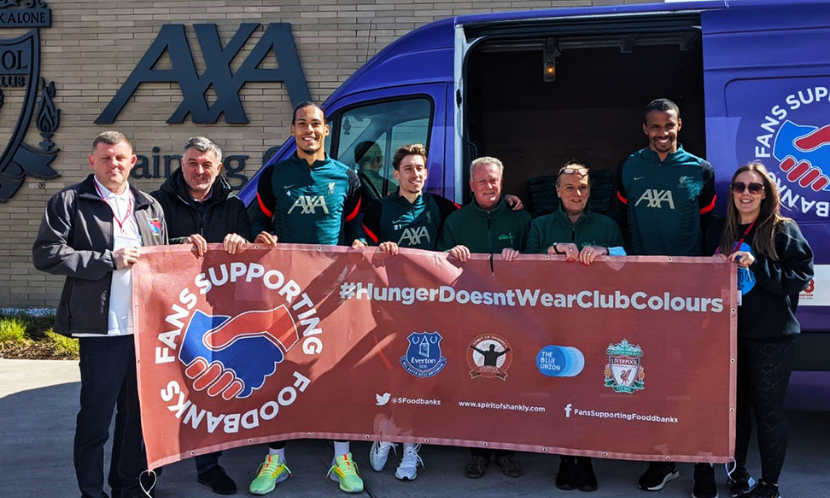 Liverpool FC and official partner Quorn have pledged to double all food donations collected by Fans Supporting Foodbanks at this weekend's Merseyside derby.

Whether a Red or a Blue, both LFC and Quorn are rallying all supporters to bring a food donation with them to Anfield and drop off at Flagpole Corner ahead of Sunday’s 4.30pm BST kick-off.

Matchday donations are crucial to supporting foodbank hubs like the North Liverpool Foodbank, which fed more than 10,000 people last year and collected food in excess of 90,000kg in weight.

It’s a community lifeline and to help it run smoothly takes a squad of local volunteers. As part of the build-up to the derby, two of these incredible volunteers from the North Liverpool Foodbank were asked to collect donations from the AXA Training Centre.

Steve and Janet Davis have volunteered for the past four years at the North Liverpool Foodbank. Both huge Reds, they were in for a surprise delivery at the AXA Training Centre when Virgil van Dijk, Joel Matip and Kostas Tsimikas personally delivered the donations from Quorn. The players also thanked them for the work they do to support the city.

Fans Supporting Foodbanks was founded in 2015 and is a joint initiative between Liverpool FC and Everton FC, promoting a global message of football solidarity because hunger doesn’t wear club colours.

Fans Supporting Foodbanks started with just three fans collecting tins of food on matchdays. They now supply a massive 25 per cent of all donations to North Liverpool Foodbank.

Ian Byrne MP and Dave Kelly, founders of Fans Supporting Foodbanks, were also at the AXA Training Centre to raise awareness for the campaign. Ian and Dave have grown their donations from a wheelie bin full of food on matchdays to a ton of food collected at every men’s game played at Anfield.