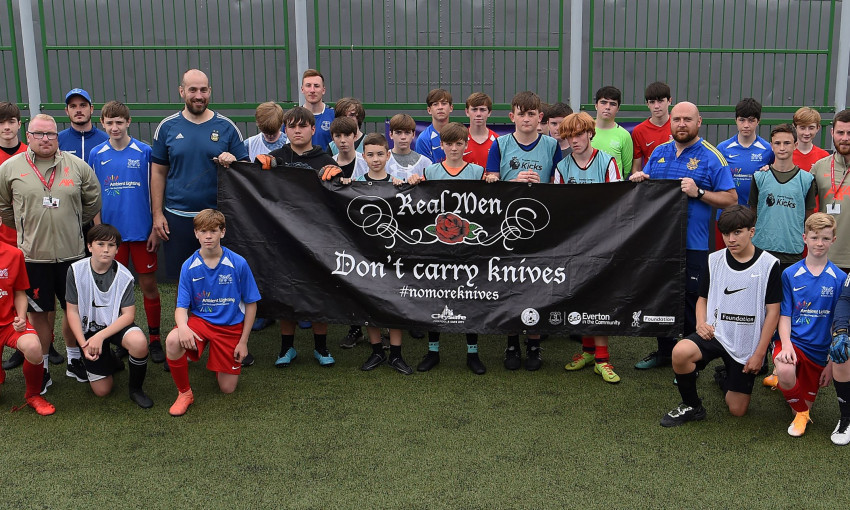 After the previous Joseph Lappin Memorial football tournament was cancelled due to the pandemic, it was great to see it return on Friday 20th August 2021.

This 5-a-side tournament brings youth providers together from across the city using the power of football to provide education on the impact of knife crime. The LFC Foundation joined together with Everton in the Community in what is already an established relationship to collaborate with the Real Men Don’t Carry Knives campaign to organise this event. The tournament took place at The Joseph Lappin Centre, which is based in Old Swan, Liverpool.

Five teams entered this competition, which was officiated by Merseyside Police representatives. The Netherton Reds won the Joseph Lappin Cup after a close 1-0 victory, whilst The Al Ghazali Centre claimed the Sub Cup.

Off the pitch, various guest speakers attended the event to highlight the impact and life-changing consequences of knife crime. Guest of honour, Toni Lappin, presented the victors with their trophy and medals, whilst accompanied by former Everton FC player/club ambassador, Ian Snodin.

Programme manager Tony Cosgrove added “It’s a real privilege for us to be able to use Joseph Lappin’s name for this annual event, which not only keeps his memory alive, but also continues our commitment in raising awareness for knife crime. Football has the power to unite and bring young people together, breaking down territorial barriers and empowering them to choose positive life choices. This is a multi-agency event which demonstrates the difference we can make through football and sport to divert young people from a gang lifestyle and organised crime”.