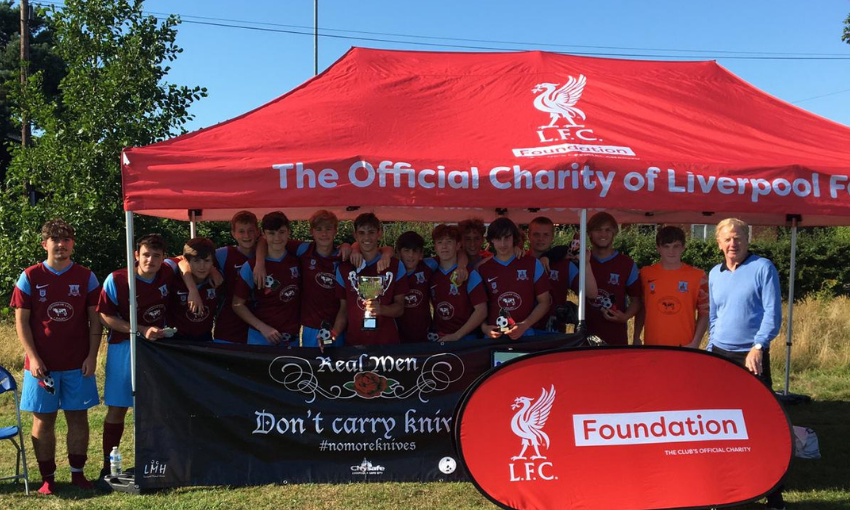 On Sunday 1st August, LFC Foundation’s Premier League Kicks programme held a pre-season U17’s football tournament, in partnership with Sefton Council. Using the power of football to bring together young people from across Merseyside, the aim of the tournament was to raise awareness of the impact of knife crime.

The event was supported by both the ‘Real Men Don’t Carry Knives’ Campaign and Crimestoppers, with guests including Alan Walsh who demonstrated the true impact of knife crime as a victim and a perpetrator and how we can all play a part in combatting the issues locally.

Eight teams from across Liverpool City Region took part in the day which turned out to be a highly competitive tournament with great skill and teamwork shown in every match.

L4 FC who were unbeaten through the tournament, couldn’t break down Ormskirk West End who held them to a 0-0 draw in The Main Cup final and held their nerve to claim victory in a penalty shootout.

The Sub Cup was won by Dynamo Rangers who overcome Greenloons Formby.

Former Liverpool FC forward and patron of Crimestoppers, David Fairclough, attended the day to award the trophies in the presentation ceremony and commended the work of the Foundation in educating young people on hard hitting issues such as knife crime.

The LFC Foundation have continued to invest and support local grassroots football using educational messages working alongside key partners to empower young people to make positive life choices and provide opportunities for personal development.
Later this month, the Foundation will join together in collaboration with Everton in the Community (EITC) for the annual Joseph Lappin 5v5 cup which brings together young people from across the city.