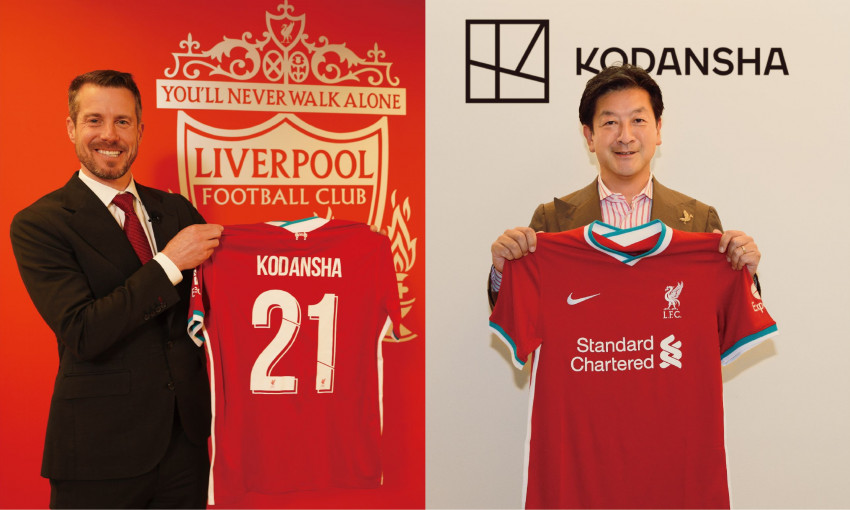 Liverpool FC has welcomed a new global partner, Kodansha, to the club as its official Publication Partner.

The multi-year deal with one of the world’s largest publishers will see the club and Kodansha work together to inspire young fans to harness their creativity and follow their dreams of achieving careers in the creative industry.

Reaching readers across 40 countries, Kodansha publishes a wide range of products, including TV and anime, magazines, picture books and novels and official merchandise. It is also a publisher of the popular comic and graphic novel series, Manga, which originated in Japan and was developed in the late 19th century. Manga has become extremely well loved by audiences of all ages all over the world, with titles such as ‘Attack on Titan’, ‘Akira’, and ‘Sailor Moon’ some of the best-known examples.

Focusing on community outreach and the belief that ‘stories can inspire and change people’s lives’, Japan-based Kodansha is teaming up with the club’s official charity, LFC Foundation, to launch ‘Creative Works’.

Commencing in September 2021, an employability programme will be delivered to a total of four cohorts of students from Liverpool John Moores University and local sixth form colleges and aims to inspire young people from challenging backgrounds to achieve careers in the creative industry.

Throughout the programme, participants will receive support and mentoring with creative skill building, CV and interview techniques, public speaking and confidence building and workplace expectations to prepare them to achieve their career goals.

Working with seven creative organisations in Liverpool across various sectors, including theatre, media and gaming, participants could also be in with a chance of earning a work experience placement.

Kodansha have also committed to making various donations to support the wider Liverpool community over the course of the partnership. Initially, it will also be making generous donations with creative and art materials, to support children’s literacy and inspire creativity from a young age.

Billy Hogan, CEO, Liverpool FC, said: “As a football club, there are so many incredible stories throughout our history, stories that are retold and kept alive through the power of creativity and storytelling. They spark excitement, memories and imagination in our fans around the world. Through our partnership with Kodansha, one of the world’s largest publishers, we look forward to creating programs which will help inspire future generations through creativity and storytelling.

“Over the past 18 months, our LFC Foundation has been building its ‘Works’ initiative, to provide a range of employability schemes for those aged 16 and over to help get their foot on the career ladder. We are delighted to work with Kodansha to launch ‘Creative Works’, a program that will provide opportunities for young people to pursue their dreams in creative careers and realise their potential.”

Yoshinobu Noma, President of Kodansha, said: “Having lived in the UK for quite some time now, I have a very special feeling about this partnership with LFC.

“Every single match that the team plays in front of their fans all over the world, incredible stories are created and shared, sparking joy and excitement. We want to harness that extraordinary power to inspire impossible stories and build a strong, successful partnership. Let us create stories that bring passion and ignite inspiration around the world, together.”

The partnership with Liverpool FC will help to increase brand awareness of Kodansha and its products globally to reach new audiences, while also helping it to achieve its community goal of ‘inspiring impossible stories’. The partnership will offer Kodansha social media and marketing support as well as access to LFC players and legends throughout the season.