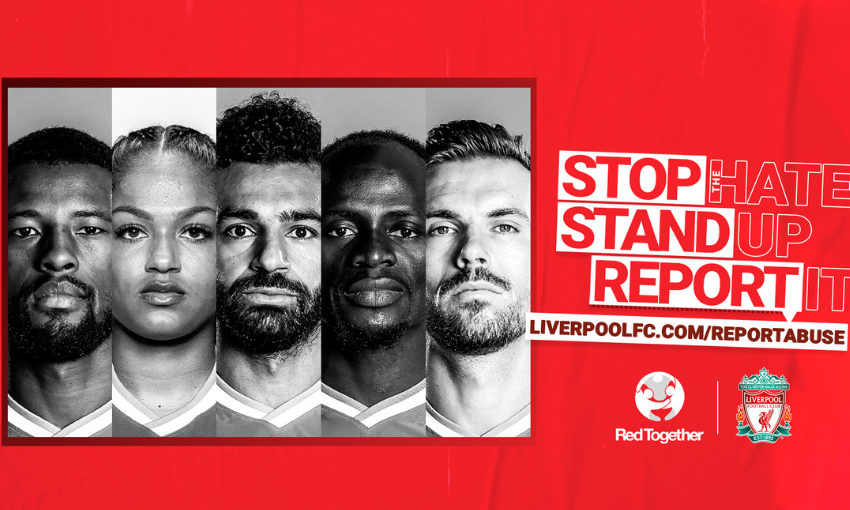 The issue of racism and discriminatory behaviour continues to plague the game, and sadly both LFC’s male and female players have been on the receiving end of this abhorrent abuse on many occasions.

To take a stand against hate, the Reds are launching a new social media campaign - Stop The Hate, Stand Up, Report It - that calls upon fans to report incidents of racism, hate and discriminatory abuse online.

The campaign aims to encourage both fans and the wider community to stand up for and support those who are on the receiving end of such abuse and take definitive action by reporting it directly to the club and relevant social media platforms.

LFC has put a new online reporting system in place to log incidences of abuse both online and in stadium for when fans return, which is available at liverpoolfc.com/reportabuse.

All reports of abuse received by the club will be investigated and escalated to the relevant authorities to be dealt with. The club will also continue to work with the Premier League, Football Association, and other integral organisations as well as calling on the social media platforms to take swift and tough action against perpetrators.

Billy Hogan, CEO, Liverpool Football Club, said: “Liverpool Football Club has such a rich heritage, and it is thanks to the diverse range of talented players that have played for the club over the years that has enabled us to achieve great success. We have been lucky as a club to see some of the greatest players from all corners of the globe, different nationalities, ethnicities, and cultures don a Liverpool shirt.

“Despite this, sadly, our players and indeed footballers across the world continue to be on the receiving end of appalling abuse, which not only affects them personally but everyone around them. This is not just about football; it is not acceptable that anyone in society is targeted in this cowardly way and it must stop. We know our fans are passionate about an inclusive club and one which welcomes everyone and therefore we are asking them to come together to stamp out discrimination. 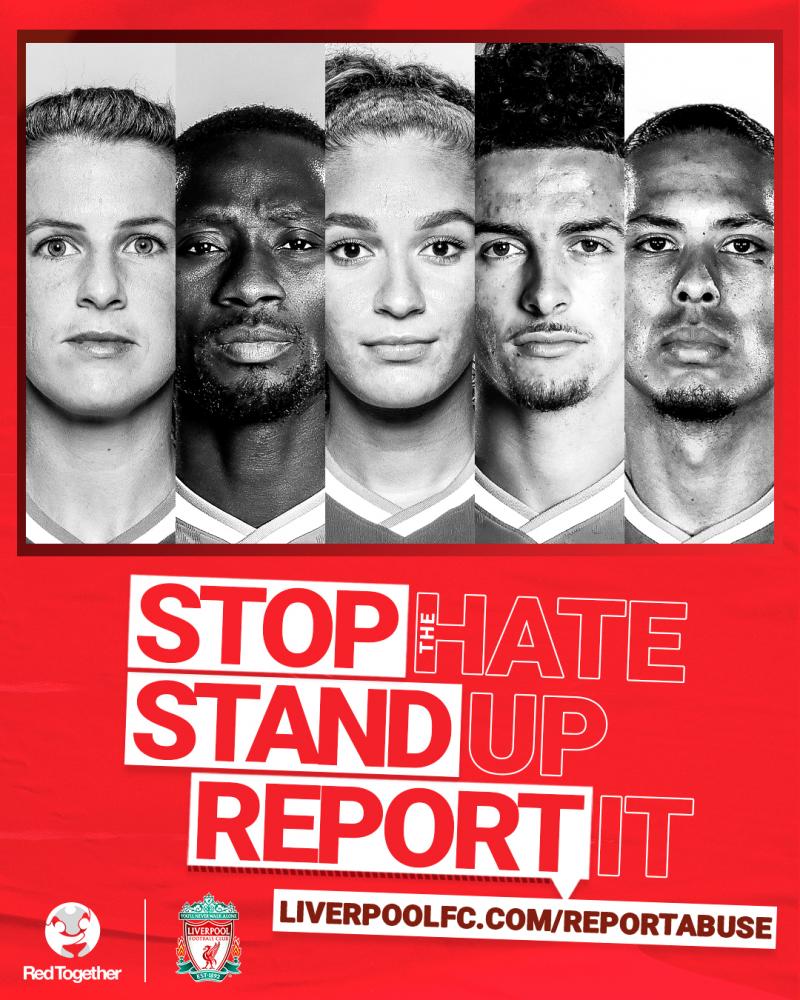 “We all need to lead the change together by calling out abuse when we encounter it  and take action by reporting it. This, along with greater consequences for those responsible for the abuse will help to fight for zero tolerance.”

The Stop The Hate, Stand Up, Report It campaign, which builds on the club’s long-standing commitment to equality, diversity, and inclusion, will sit under its Red Together platform. In addition to the social media campaign there will also be a range of content that will run across LFC platforms and new stadium graphics, which fans will see upon their return to Anfield.

Following the launch of the Stop The Hate, Stand Up, Report It campaign, the club will be joining footballing organisations right across England by boycotting its social media platforms from Friday 30 April at 3pm to midnight on Monday 3rd May.

This will include switching off its Facebook, Instagram, Twitter and TikTok accounts among others to show solidarity and unite against the ongoing and sustained discriminatory abuse received online by players and many others connected to football.

The boycott is also designed to emphasise that social media companies must do more to eradicate online hate, while highlighting the importance of educating people in the ongoing fight against discrimination.

In an act of solidarity, club partners Standard Chartered, Nike, Carlsberg and Nivea Men among others, have also agreed to take part in the boycott.

Hogan concluded: “We know boycotting these platforms alone will not eradicate this behaviour, but it is one way of showing that we are willing to take action and proactive steps to fight discrimination in all its forms. Whilst also putting pressure on social media companies to do more to combat online abuse and hold to account the individuals who are responsible for it.”