LFC Foundation and Right To Play are working Side by Side to transform the lives of children at home and away. 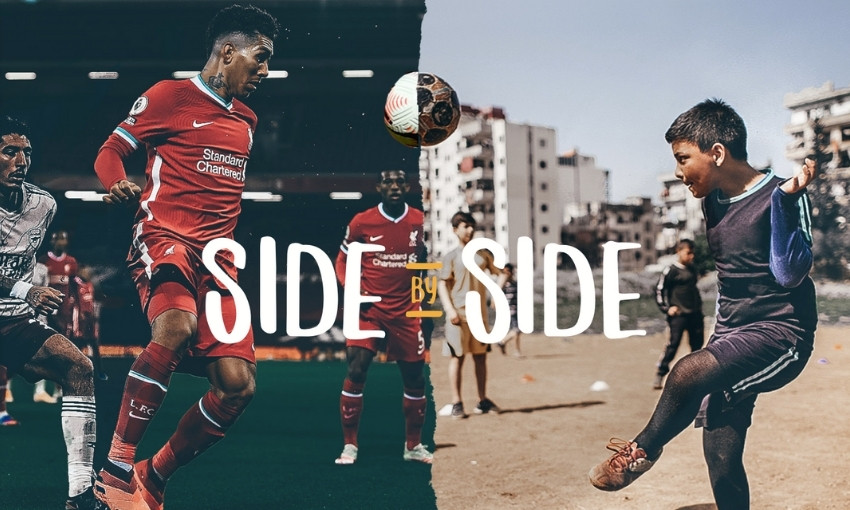 The Reds official charity, LFC Foundation, and global children’s charity Right To Play are working Side by Side, using the power of sport and play to help vulnerable children in Liverpool, Bangkok, and around the world.

To raise awareness and support of the partnership, Right To Play and Liverpool FC Foundation have launched a new digital campaign - Side by Side - which will feature across the club’s digital channels.

The Side by Side campaign includes a video narrated by the Reds manager and LFC Foundation Ambassador, Jürgen Klopp, which shows the power of play and sport in action, and aims to inspire viewers to come together and support the campaign.

As well as driving awareness for the game-changing partnership, the campaign will seek support from the LFC family to join the Side by Side movement and help raise funds to provide children around the world with the tools and skills they need to overcome the impacts of poverty, conflict, and disease, and become empowered to learn, lead, and succeed.

The need for support is more important than ever in these challenging times as the devastating global impact of the pandemic  continues to make children’s lives harder every single day.

Jürgen Klopp, LFC Foundation Ambassador said: “Millions of children around the world are facing adversity and being forced to grow up too fast. Side by Side gives children the opportunity to rise above their challenges and thrive through the power of sport and play.

“Liverpool Football Club has the best fans in the world - no matter where we live, we’re all part of the Liverpool family and Side by Side we can do anything.”

During last season’s UEFA Champions League competition, fans may have noticed the addition of the Right To Play logo on LFC’s kit. The logo will again be worn during the upcoming Champions League campaign and is available for fans to add to their shirts in LFC stores and the online retail store. All of the proceeds raised from the sales will support the work of the Side by Side partnership. You can access the LFC store here.

“We are so proud to be working in partnership with Liverpool FC Foundation to create a lasting impact in children’s lives,” said Right To Play CEO Dr. Kevin Frey.

“Liverpool FC is recognised not just for its accomplishments on the field, but also for its commitment to improving the lives of children and young people  in Liverpool and beyond. Right To Play is a global leader in harnessing sport and play to protect, educate and empower the world’s most vulnerable children. Working side by side with LFC Foundation will allow us to combine our expertise to reach more children in Bangkok, Liverpool, and around the world and ensure they have the skills and support they need to learn, lead, and succeed.”

Right To Play’s partnership with Liverpool FC Foundation has kicked off with joint programmes in Liverpool and Thailand and will expand to include other countries as the partnership develops.

In Thailand, projects will focus on working with the most vulnerable children living in urban Bangkok to develop critical life skills, including leadership, self-confidence, communication and resilience. The programmes will also build and rehabilitate play spaces to ensure young people have safe, accessible areas to play and learn.

At home in Liverpool, the project will build upon the LFC Foundation’s existing Open Goals programme in Anfield, which provides free multi-sport sessions in local parks to help educate and engage young people in the local area. The partnership with Right To Play will enable Open Goals to be delivered in more parks and open spaces in areas of need across the Liverpool City Region, and potentially beyond in the UK.

Fans will have the opportunity to feature on a pitchside board during a live Liverpool FC Premier League game at Anfield. Launching on Wednesday 21st October, ahead of The Reds’ Champions League match against Ajax, the exclusive competition will give fans the chance to appear Side by Side with their LFC heroes. Full T’s and C’s can be found on the Side by Side website.
If you would like to find out more about Side by Side and sign up, please visit: liverpoolfc.com/sidebyside