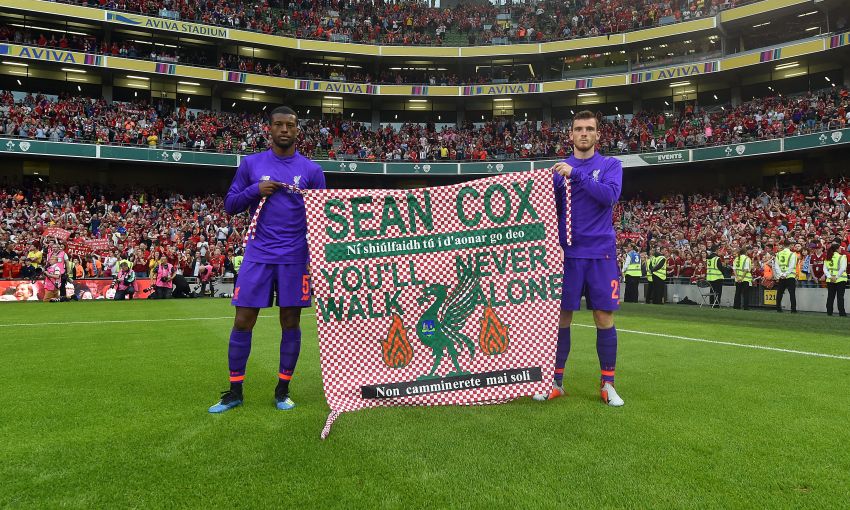 LFC Foundation will donate the proceeds from the Wolverhampton Wanderers match day lottery to the Seán Cox appeal.

All of the funds raised at the Reds’ final Premier League game of the season on Sunday will go to support Seán via the Seán Cox Rehabilitation Trust.

Seán travelled to Anfield to watch his beloved Reds in last season’s UEFA Champions League semi-final and that night, he was the victim of an unprovoked attack outside the stadium. He suffered life-changing injuries and thirteen months on is continuing his rehabilitation journey back home in Ireland.

The club, fans, and his local community have come together in support of Seán and his family, raising vital funds for his care and sending messages of love and encouragement in his recovery.

Last month, the club hosted a special charity game between LFC Legends and a Republic of Ireland XI at Dublin’s Aviva Stadium in aid of the Seán Cox Rehabilitation Trust.

At the Reds’ Premier League fixture against Cardiff City back in October, the club and fans also joined forces to show their support for Seán. Volunteers from Liverpool FC and Spirit of Shankly staged a bucket collection at Anfield, which was match-funded by LFC Foundation.

The club and its players are also supporting the appeal privately.

The LFC Foundation Lottery is drawn at each home game and can be played online in advance by visiting www.liverpoolfc.com/lfcfoundationlottery. Tickets are also available on the day from sellers in and around the ground. Players must be aged 16 or over.

If you'd like to donate to the Seán Cox Rehabilitation Fund directly you can do so by visiting www.gofundme.com/SupportSeanCox.