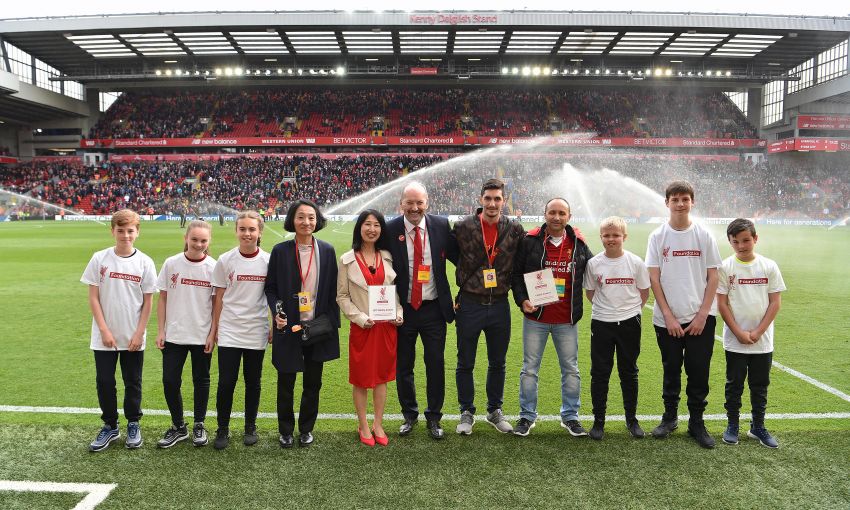 Liverpool were held to a goalless draw by Paul Lambert’s side who were trying to secure points for Premier League survival.

Liverpool FC’s official charity delivered a variety of child and family-friendly activities and fundraising initiatives taking place in and around the stadium during Matchday.

This also acted as a taster for the upcoming LFC Foundation’s Open Goals project, launching tomorrow – Saturday 5 May -  in 5 parks around the city including; Stanley Park, Doric Park, Wavertree Park, Belle Vale Park and Walton Hall Park! Open Goals is a new sport and physical activity programme designed to support families to be more active together through free, mass participation activities in open spaces.

Learn more how you can get involved here!

The LFC Foundation’s team of volunteers returned, helping to fundraise in the hospitality lounges through the sale of raffle tickets, with signed LFC memorabilia prizes on offer for lucky winning fans!

Mighty Red was also in attendance, adorning his special LFC Foundation t-shirt and was busy entertaining the crowds of youngsters at the Fan Zones in Paisley Square and Anfield Road. Families attending the match together were full of smiles and delighted to see the club’s official mascot in person and the increased level of family-focused activities.

Just before kick-off, participants from the LFC Foundation’s Kicks programme took on roles as flagbearers and were stationed along the touchline whilst the players walked out onto the turf. Proudly waving the LFC Foundation flags which matched the LFC Foundation centre circle, this helped in communicating the message of #LFCFoundationDay and raising the profile of our work in our local communities.

At halftime, the Official Liverpool Supporters Clubs of Cyprus and Japan were led down to pitchside, to take photographs with Liverpool FC’s CEO Peter Moore and LFC Foundation participants from the Premier League Kicks Football Programme.

The reason? Both OLSCs were winners in this season’s ‘OLSC Challenge’. The competition challenged all 270 OLSCs across 88 countries to organise creative events and activities to bring fellow Reds together while raising funds for the club’s official charity. Through winning their awards, each branch was given the opportunity of a VIP matchday experience at Anfield.

Vital funds raised from the LFC Foundation Day will support the Foundation’s projects and charity partners, which aim to create life changing opportunities for children and young people.