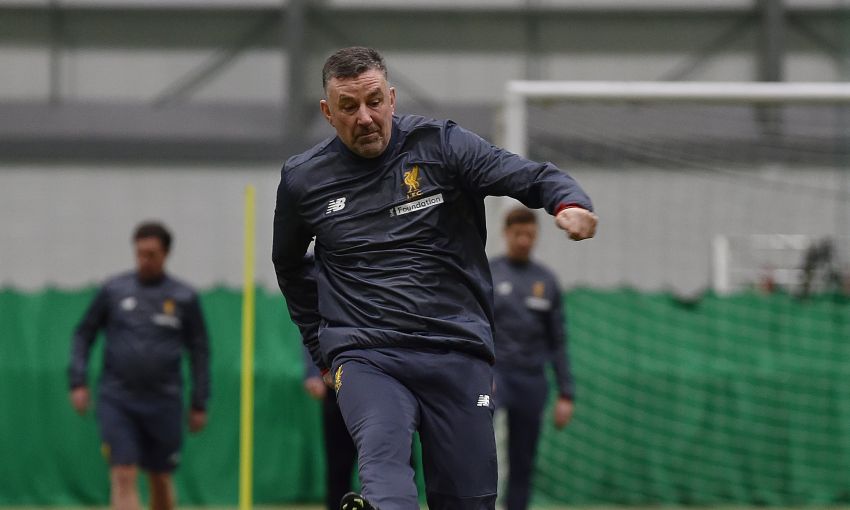 John Aldridge can’t wait to pull on the red shirt again on Saturday - although the former striker isn’t keen on the idea of having to ‘chase’ another Liverpool great around the Anfield turf!

This weekend, Aldridge will team up with the likes of Steven Gerrard, Dirk Kuyt, captain Robbie Fowler and player-manager Ian Rush as the LFC Legends take on their counterparts from Bayern Munich in a match being played in aid of the club’s official charity, the LFC Foundation.

Ex-Republic of Ireland international Aldridge, who scored 63 goals in 104 appearances for the Reds in the late 1980s, netted at the Kop end during Liverpool’s 4-3 win over Real Madrid in the first Legends game staged at Anfield a year ago.

That match raised over £1million, with those funds going directly to the LFC Foundation to support its programmes and partnerships to help make a difference to the lives of children and young people.

And former No.8 Aldridge is excited about playing at Anfield once again while raising money for a worthy cause.

“I’m looking forward to it immensely. I’m very fortunate, at the ripe old age of nearly 60, to be included. I think the lads have taken pity on me!” he told Liverpoolfc.com.

“It’s special, it’s always special [to play at Anfield]. I’ve been supporting Liverpool for nearly 55 years now. Whenever I go to the stadium it’s special. When I played for the club, everybody knows my thoughts on that.

“Other than your family, it’s your next of kin. It’s brilliant. For the Foundation to put a spectacle on like this, and raise money for local causes, is absolutely tremendous. It’s just a win-win.

“We all know there are needy people out there, especially locally. You’ve got to look after your own and the club do that brilliantly. We get together and we can enjoy ourselves, and we’re competitive as well, as you saw with the Real Madrid game. Bayern Munich will come and want to win, and we’ll still want to win.

“It’s not going to be blood, guts and thunder but it will be played in the right manner and the right spirit - and we want to win the game.”

However, Aldridge joked that the prospect of opposing the recently retired Xabi Alonso - who will represent both teams on the day - isn’t particularly appealing.

“It will be great to see Xabi Alonso. I don’t fancy having to chase the ball off him for 45 minutes! He’s welcome with open arms from every Liverpool supporter because he was a special player for us,” he said.

“It will be great to see Dirk back at Anfield, he was a player that the Kop really related to with his work ethic, and he scored some good goals as well.”

Aldridge has fond memories of the meeting with Real Madrid 12 months ago, and hopes he can roll back the years by getting his name on the scoresheet once again.

“To see them in the stadium was superb. And the game was just brilliant. To get on the scoresheet, via Fowler and Gerrard in front of the Kop and my grandkids, it was an awesome day.

“I can get into the positions, but the legs aren’t the same! I missed a couple of great opportunities as well. Even though I was only on for 13 minutes I could have had a hat-trick. I’ll settle for one [this time]!”

Money raised from the charity game will help to fund a variety of projects for the LFC Foundation and charity partners. You can watch the match for free, live on the official LFC Facebook page, LFCTV GO, Sky channel 429 and Virgin Media channel 544 (3pm GMT kick-off).