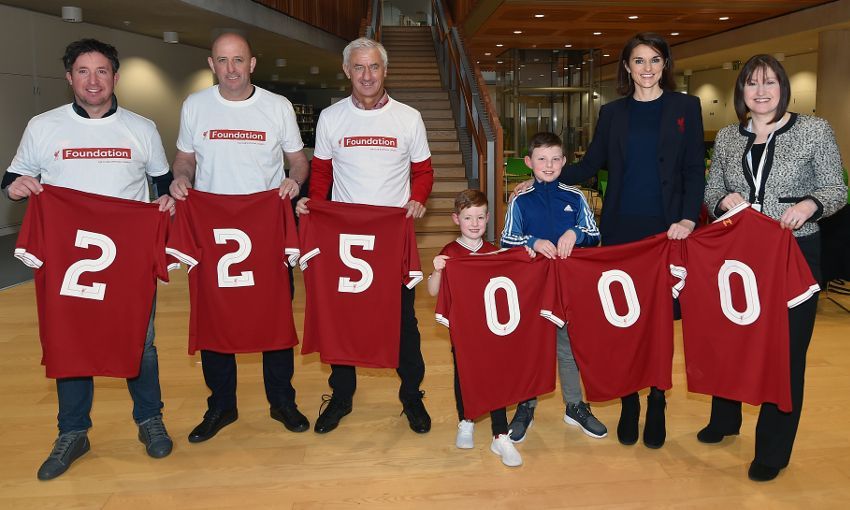 The LFC Foundation has made a £225,000 donation to Alder Hey Children's Charity for the hospital's new research, innovation and education facility.

The funds were raised by Reds fans who attended and supported the Liverpool FC Legends’ charity match with Real Madrid at Anfield in March 2017, plus other activities held by the club’s official charity throughout the year.

The Institute in the Park will enable the hospital to develop better, safer medicines and treatments to benefit young patients at Alder Hey and children across the world.

Their aim is to develop the next generation of medicines and interventions that are even more effective, and safer to treat children, for generations to come.

The Institute will also be home to the Alder Hey Academy, which will aim to provide the very best healthcare education across the NHS and abroad.

Reds legends Robbie Fowler, Gary McAllister and Ian Rush, who took part in last year’s charity match, visited the hospital on Tuesday to meet with patients who are benefiting from the research taking place in West Derby.

One brave young boy who has both benefited from, and contributed to, the available expertise and treatment at Alder Hey is Harry Howard.

The four-year-old from Wigan was diagnosed with Stage 4 Non-Hodgkins Lymphoma, a cancer of the blood, in November 2016 and his family spent 140 nights at the hospital as he underwent more than 200 treatments, including seven rounds of chemotherapy.

In June 2017, Harry was given the news that his cancer was in remission, and to give something back to Alder Hey as a sign of his gratitude, he participated in clinical trials designed to help improve future treatments for children.

“It’s because of children like Harry taking part in clinical trials that the treatments are available today which have helped Harry beat a very aggressive and advanced cancer,” said his mum, Helen.

“We are eternally grateful for that.”

Find out more about his story in the video here:

Andrea Cooper, head of the LFC Foundation, said: “It is really fantastic to be able to make this donation to Alder Hey Children’s Charity for such an important cause, and we know from our fans that the health and life chances of children and young people is an issue close to their hearts.

“We have a long-standing relationship with the hospital and it is exciting to see the innovative research programmes that are being undertaken which make a huge difference to the lives of so many children and young people.

“It’s thanks to our fans and the LFC family that we raised an amazing £1million at last year’s Legends charity match, in addition to funds raised at our other fundraising events, and we are hoping to achieve the same level of support this year.

“The funds we raise don’t only fund our own Foundation programmes but they support our other charities and non-profit partners, including the University of Liverpool and INTO University North Liverpool project, the Liverpool School of Tropical Medicine, as well as Alder Hey Children’s Charity.”

Clare White, CEO of Alder Hey Children’s Charity, said: “We are delighted to receive this substantial donation from the LFC Foundation.

“This will enable us to support the hospital’s vision of becoming a world leader in child health through research, innovation and education.

“This is another example of how our long-standing partnership with LFC and the LFC Foundation is making a huge difference to the lives of children, both now and in the future. Thank you so much to all the LFC fans who have made this possible.”