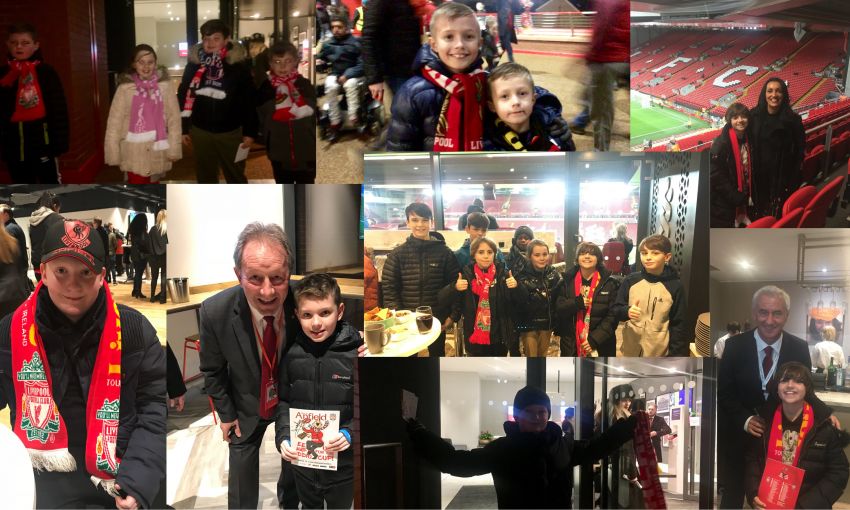 Participants from the LFC Foundation’s programmes had an unforgettable experience as they were invited to the FA Cup match between Liverpool FC and West Bromwich Albion on behalf of Standard Chartered Bank.

The Club’s partner donated their hospitality box for the clash, as the Reds were consigned to a fourth-round exit to the travelling Baggies.

After the first five minutes, the youngster’s smiles were beaming as brightly as Firmino’s, with the Liverpool No. 9 chipping in from an unlikely angle outside from the box, in what was the perfect start for the Reds. The lead lasted a mere 68 seconds, as Jay Rodriguez capitalised on the Red’s defensive hesitancy, bursting the net with an unstoppable finish that gave Mignolet no chance.

The visitors doubled the lead just two minutes later, with Rodriguez grabbing his second to stun the Kop and stake his claim for a place in the England World Cup Squad. The Baggies were soon celebrating again, as Dawson latched onto a recycled ball forcing Matip to turn the ball into his own net.

Despite pulling one back in the second half through talisman Mo Salah’s effort, it was merely a consolation goal as the final result finished 2:3 in favour of West Brom.

This didn’t damper the youngster’s spirits, as the locals were so excited about watching the game live and seeing their hero’s play for the first ever time.
On behalf of the LFC Foundation’s participants, we’d like to thank Standard Chartered for their generosity.