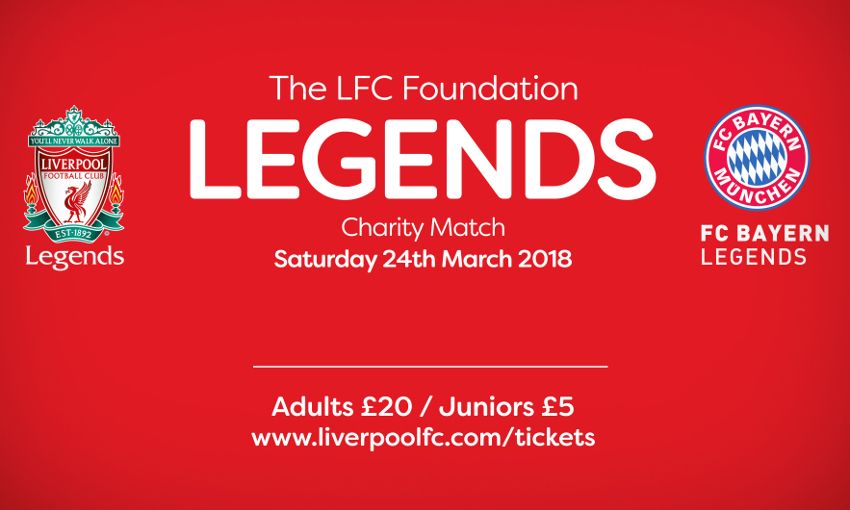 The Club’s official charity, Liverpool FC Foundation, announced today that it will stage its second official legends game at Anfield next year.

This time around the Liverpool FC Legends will take on the legends of Bayern Munich on Saturday 24th March, 2018 at Anfield in aid of the LFC Foundation.

The game will see Liverpool FC Ambassador, Robbie Fowler captain the Reds side with the hope of claiming another LFC Legends victory in front of the Kop.

90% of the proceeds from the match will go to the LFC Foundation - the Club’s official charity. The aim of the LFC Foundation is to create life changing opportunities for children and young people. The funds raised will support the charity’s programmes and partnerships and the remaining 10% of the money raised will be donated to Bayern Munich’s charity - FC Bayern Hilfe e.V.

Money raised from last year’s charity game has helped to fund a variety projects for the LFC Foundation and their charity partners with many more still in the pipeline; including projects with IntoUniversity and Alder Hey Children’s Hospital.

Robbie Fowler, captain of the Official Liverpool FC Legends team said: “After the success of the first official legends game we are really looking forward to playing Bayern Munich legends next year. We hope to create another fun, entertaining yet competitive game for all our fans at Anfield, whilst helping to raise funds for the Club’s official charity.”

Andrea Cooper, Head of the Liverpool FC Foundation added: “We are delighted to be able to announce our second official legends charity match at Anfield and we are looking forward to welcoming our friends from Bayern Munich. Our fans were so supportive last year and helped us to raise over £1m for the children and young people. This year we hope to create another fantastic family event and with the help again of our fans to raise funds that we can use to make a positive difference to thousands of children and young people across Merseyside and beyond.”

Tickets for the game are priced at £20 for Adults, £5 for Juniors and £15 for Over 65’s. Tickets will go on sale to Season Ticket Holders and LFC Members from 11am on Monday 20th November. Tickets will be on general sale from 11am on Wednesday 22nd November.

Hospitality starts from £70 per person, please call 0151 264 2222 for details, or visit https://bookings.liverpoolfc.com/events/events.htm