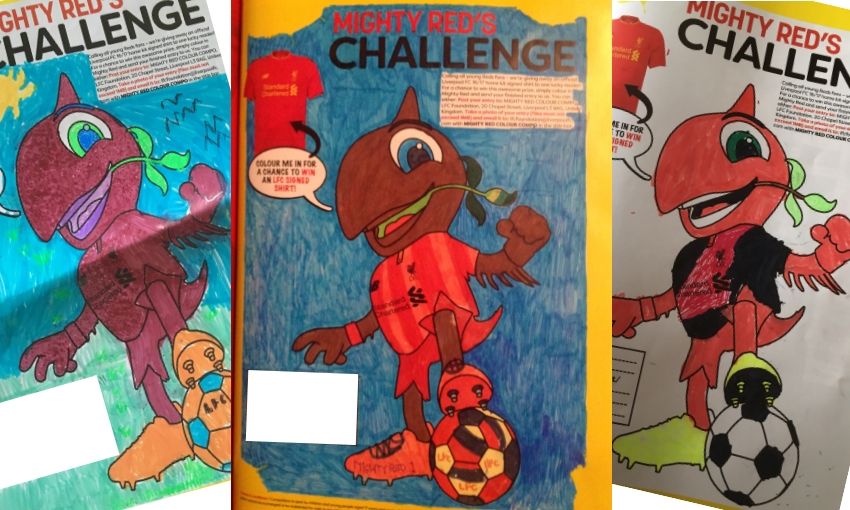 The LFC Foundation, the Club’s official charity, launched ‘Mighty Red’s Challenge’ at their recent LFC Foundation Legends Charity Match, where children and young people had the chance to enter a colouring competition for a chance to win a 16/17 home shirt signed by First Team players.

The Foundation received some truly amazing entries, and the extremely hard task of selecting a winner was in the hands of Andrea Cooper, Head of LFC Foundation.

After a lot of deliberation, Matthew, aged 10 from Dartford, Kent was selected as the winner with his very creative and colourful entry.

Andrea Cooper, Head of LFC Foundation said: “It was such a tough choice as we received so many worthy entries. What I particularly like about Matthew’s entry is his attention to detail, even down to adding ‘Mighty Red 1’ to the football boots! Congratulations Matthew on your brilliant effort.”

Andrea continued: “As there were so many wonderful entries we have also decided to award two runners up prizes, which go to Alice, aged 12, from Weston, Cheshire who coloured-in a great background for Mighty Red and Robert, 6, from Bracknell because we loved the colour he chose for Mighty’s football boots. I think he must have taken inspiration from some of our players!”