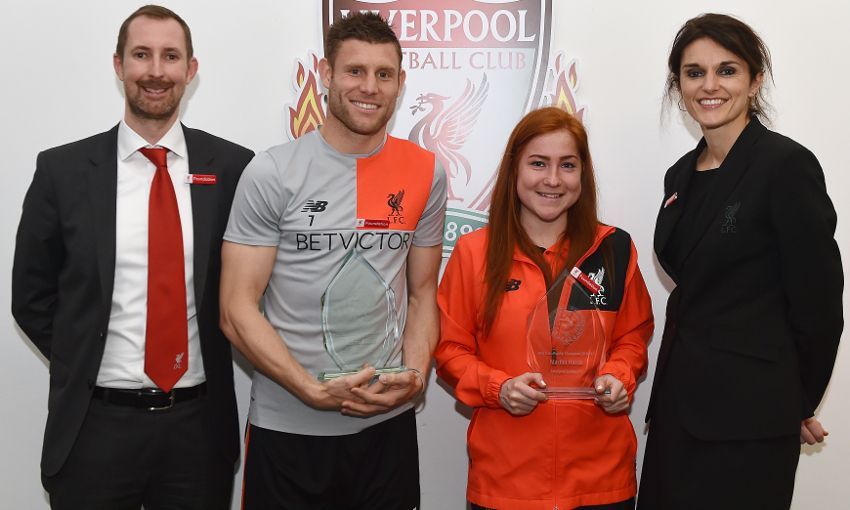 James Milner and Liverpool Ladies defender Martha Harris have been awarded PFA Community Champion Trophies in recognition of their support of the LFC Foundation.

The awards, received for the players’ respective work in the local community, were presented by the LFC Foundation during a special handover at Melwood.

The Community Champion Trophy was introduced by the Professional Footballers’ Association last season for clubs in the English Football League, but following its success, the award has now been extended to include Premier League clubs.

Milner was nominated by the LFC Foundation following his generous donation to fund a series of half-term multi-sports camps in Anfield, which will benefit almost 500 local children in total.

James’ own charity, the James Milner Foundation, donated £16,000 to the LFC Foundation last year and he has since visited the sessions, getting involved in the activities and meeting the participants.

Ladies’ star Harris was nominated by the LFC Foundation for her commitment to local grassroots clubs and community sessions, which she has attended regularly as part of her university degree.

Martha’s presence at the sessions has inspired many female football participants, in particular the attendees of the LFC Foundation Women and Girls project.

“Their commitment and dedication to the projects they have supported has made such a difference, and their presence at sessions has been invaluable to the participants.

“We’re delighted to hand over these awards in recognition of their wonderful efforts.”