Reds calls on fans to support foodbank collection at the Derby 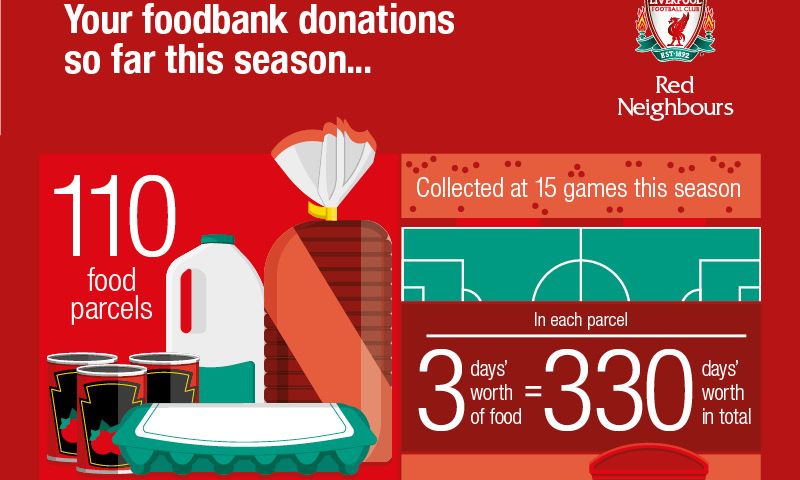 Ahead of this weekend’s 228th Merseyside derby, LFC is encouraging its fans to help tackle local food poverty by donating what they can to the foodbank collection point.

Fans attending the game at Anfield on Saturday afternoon can drop-off any non-perishable food donations at the collection point, which is located on Anfield Road, next to the Club’s family park.

Staffed by supporters and volunteers from the North Liverpool Foodbank, the drop-off point will open at 9:30am and will close at kick-off at 12:30pm.

All food collected is donated to the North Liverpool Foodbank that provides local people in need with essential three day food parcels.

The Club’s Red Neighbours programme has supported the Fans Supporting Foodbanks (FSF) initiative at 15 home games so far this season, resulting in a total of 1,586 kg of food being donated by fans.
Food poverty and food education is one of the Red Neighbours programme’s key priorities that were chosen after extensive consultation with the Anfield community about local needs.

The FSF initiative, which was set up by local Liverpool and Everton supporter groups, is delivered in conjunction with North Liverpool Foodbank, Anfield Breckside Community Centre, Unite in the Community and the Trussell Trust.

Vicky Ponsonby, foodbank manager of North Liverpool Foodbank, added: “Our foodbank provides a real lifeline to local people in need. Every week we help approximately 250 people with emergency food parcels due to a variety of different circumstances - such as a delay or a change in welfare payments, low income or illness.

"Due to the ever growing demand on our services, we really do rely on the generosity of people who help us to continue our important work. It never ceases to amaze me the support we receive, it’s fantastic.”

Ian Byrne, founding member of Fans Supporting Foodbanks and family match goer representative for the Liverpool FC Supporters’ Committee, added: “The fans have shown great support for our matchday foodbank collections and I would like to extend my thanks to all them for helping us to respond to the growing food poverty crisis in the city.”