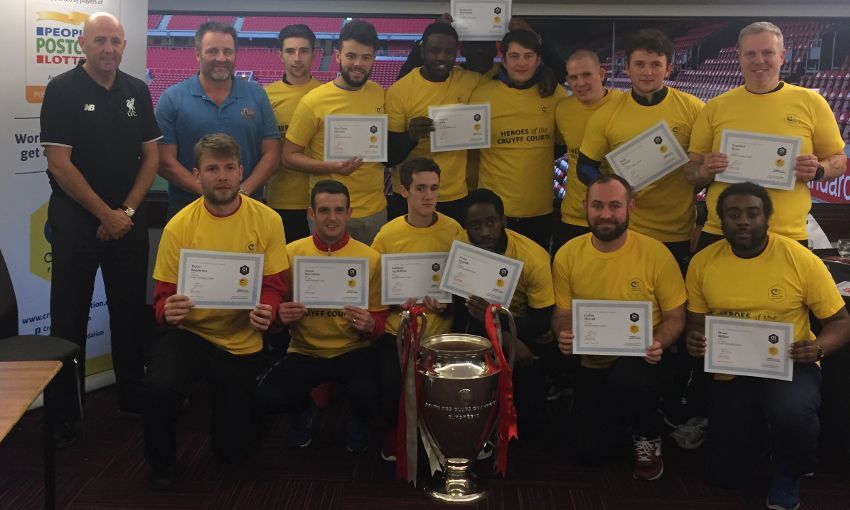 Club ambassador Gary McAllister was a guest at the Cruyff Foundation course for coaches this week, alongside official charity Liverpool FC Foundation.

The former Reds midfielder headed to Anfield to be introduced to the participants, before discussing his football career and handing out certificates to the successful candidates.

McAllister said: “It is brilliant to see so many people from the Cruyff Foundation working with LFC and various other football clubs throughout the United Kingdom.

“Coaching in the local community is really important and provides many youngsters with the opportunity to play football, socialise, and keep fit.

“I am really pleased for all of the successful coaches who have completed the Cruyff course and I am sure their skills will go on to provide inspiration to many people.”

The Cruyff Foundation was established in 1997 by Dutch football legend Johan Cruyff, with its mission to get children active and moving up in society through various projects which stimulate sports and games.

Following Cruyff’s passing earlier this year, the foundation’s goal of stimulating the development of children through sport has remained unchanged, with coaches trained in order to connect with and develop local youth.

Since the course, the coaches have been able to work with a number of young people, inspiring them to make positive contributions to the local community by using a combination of classroom-based activities and practical sessions on the Cruyff Court at Anfield Sports and Community Centre.

They then attended this week’s Cruyff Foundation course, held at Anfield Sports and Community Centre, to share their experiences with the participants.

Head of the Liverpool FC Foundation, Andrea Cooper, said: “We are delighted to be able to work alongside an inspiring organisation such as the Cruyff Foundation.

“It was also a pleasure to be able to invite Gary down to Anfield as a club ambassador to talk all of the coaches through his footballing career and the dedication and commitment involved with being a professional footballer.”